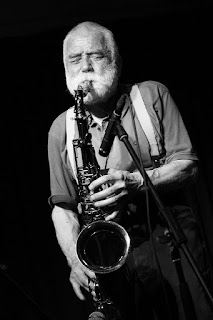 The sudden screams and splutters from three saxophones is shocking and disturbing, the following rat-at-at-at of the two drums rattling and unsetteling. The sound barrage is almost overwheling, shaking the listener out of their comfort zone. Even now, having listened to Machine Gun countless times since I first encountered it over 20 years ago, I'm never quite prepared for that opening salvo.

That initial outpouring soon gives way to much mellower sounds, though. Out of the smoke pops Fred Van Hove's slighty swinging piano, subtly stumbling bass patterns by Peter Kowald and Buschi Niebergall, and an off-kilter, drunken saxophone forging its way in between. Only to be shaken up by yet another outburst.

Peter Brötzmann's work tends to keep you on your toes and alert. It can also seem like perfect examples of what Robert Wyatt termed "trying to find beauty where others see ugliness" (paraphrasing here, since I can't at the tie of writing find the original quote). Not that there's anything beautiful about a machine gun barrage, mind you. Some of his work is just downright beautiful in its own right, though, such as the solo work 14 Love Poems (reissued last year on vinyl by Cien Fuegos). On the other side of the spectrum is stuff like LAst Exit, music that hits as hard as any you can think of.

Throughout his career Brötzmann has played with some of the greatest bassists. The above mentioned Kowlad, of course, not to forget William Parker in projects like Die Like a Dog. But I mention this specifically to highlight one of my fave Brötzmann recordings, Songlines, where he teamed up with the mercurially brilliant Fred Hopkins (of Air fame) as well as a certain Rashied Ali, arguably the nimbles bass-drum combo Brötzmann ever played with, and he more than holds his own. 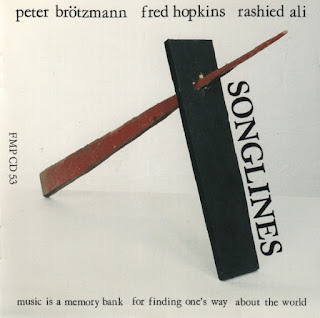 That's just the tip of an iceberg of recorded output that numbers over 300 recordings and counting, with groups and solo work under his own name, Die Like a Dog and Last Exit, to collaborations with Cecil Taylor, ICP, Globe Unity Orchestra, Frode Gjerstad, and the more recent work with pedal steel guitarist Heather Leigh. I've only had the chance to witness him live in concert once, with the Peter Brötzmann Chicago Tentet at Molde International Jazz Festival in 2007. It was an experience I won't soon forget. Hopefully, another chance or two will arise once this pandemic blows over.

Perfect Sounds was an outlet for thoughts and comments on music and other aspects of culture, as well as listening notes, or short drafts, if not full reviews of albums, songs and concerts worthy of note or in other ways of general interest. These days, it is mostly used as place for infrequent "report cards", which is to say notes on and links to my published writing and criticism, or other contributions, such as polls.