Death - "Politicians In My Eyes"

I wrote a piece on a closed forum yesterday about the incredible proto punk-band Death (no relation to the metal band), and this morning there's an article on Popmatters using almost the exact "headline" as I did. Oh, well. I'm not accusing anyone. The forum is "invite only", so it may be a case of "brilliant minds think alike." Articles about the band have been written a few times already these last few weeks, in the NY Times, the Guardian, and Stereogum to name a few. 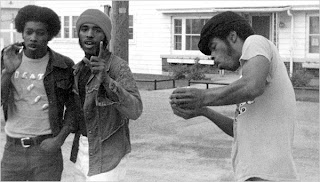 Now, Death. A mid-seventies three piece from Detroit who played an energetic blend of P-funk and Stooges-type rock. The meme that has been going around is that they are precursors to the Bad Brains. In some ways that may be true, especially considering the wailing voice of the singer. But the frenetic bassline, skittering drumming, and accentuated guitars in the verse part of "Politicians In My Eyes" (from 1975) sounds more like something the Minutemen would play a few years later, though the refrain and coda is more in line with the "rock-ier" sides of Funkadelic (I've been told that they shared a studio with the Detorit branch of Funkadelic, which may explain some of the influence) and proto-punk bands like Rocket From the Tombs. Hear for yourselves below.

The compltete recorded output of Death, a mere seven songs, was released by Drag City earlier this year as ...For the World to See.
Lagt inn av Chris Monsen kl. 3:37 PM